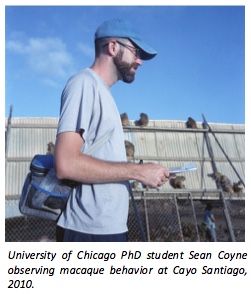 The origins of the Caribbean Primate Research Center started in 1912 with the founding of the Institute of Tropical Medicine and Hygiene, the forerunner of the University of Puerto Rico School of Medicine. Scientists associated with this institution sought to establish an Old World monkey colony for biomedical studies and to serve as a field site for the study of primate social behavior.
Primatologist Clarence Carpenter, with the financial support of Columbia University’s Markle Foundation, set out in an expedition to India in order to obtain nonhuman primates for the island of Cayo Santiago—a property provided for use by the Roig family of Puerto Rico to the UPR School of Tropical Medicine. Carpenter was able to obtain 500 rhesus macaques from the Lucknow region of India and, after 40 days of travelling by ship, arrived in New York on October 6, 1938. Four hundred fifty (450) of these rhesus macaques were then shipped to San Juan, Puerto Rico and released on the island of Cayo Santiago in late December 1938. Carpenter pioneered the study of the social and sexual behaviors of rhesus macaques.
In 1956, the daily census was resumed through the leadership of Stuart Altmann, Cayo Santiago colony manager and E.O. Wilson’s doctoral student. Altmann’s early study on the Cayo Santiago macaques eventually became a foundational text for animal behavior studies. The population census continues to this day, making the Cayo Santiago database one of the most extensive longitudinal demographic record in the world.
Correspondingly, William Windle, then Director of the Laboratory of Perinatal Physiology (the mother unit of the Cayo Santiago colony) conducted rhesus experimental studies on the challenges related to childbirth that led to major changes in human infant delivery procedures. Windle was awarded the Lasker Prize (American Nobel Prize) in 1968 for his work. This pioneering biomedical research tradition is continued in the Sabana Seca Field Station and the Virology Laboratory, where groundbreaking studies on comparative medicine are currently undertaken.
The University of Puerto Rico officially established the Caribbean Primate Research Center to meet the growing demands of colony management and nonhuman primate research on July 1, 1970. The Sabana Seca Field Station was designated as the seat of the CPRC administration. Moreover, CPRC Scientist-in-Charge Donald Sade started the skeletal collection in early 1970 and continued by succeeding CPRC scientists. By 1982, the University of Puerto Rico founded the CPRC Museum, now the Laboratory of Primate Morphology. At present, the CPRC skeletal collection houses 3,600 complete skeletons of nonhuman primates, mostly rhesus macaque bones from the Cayo Santiago and Sabana Seca field stations.
To this day, the scientific and veterinary staff of CPRC’s four facilities are committed to this strong tradition of scholarship. The research output of CPRC continues to lead in advancing our understanding in biomedicine and primate studies.
The information above is a shortened version of Kessler, Matthew J., and Richard G. Rawlins. "A 75‐year pictorial history of the Cayo Santiago rhesus monkey colony."  American journal of primatology  78.1 (2016): 6-43. To access the longer version,  please click here.