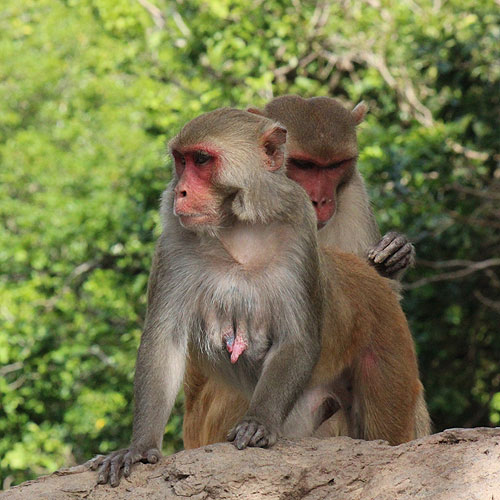 Homosexual behaviour is common in several animal species – including humans. This has often been considered a 'Darwinian paradox' as non-reproductive sex will result in fewer descendants and lead to extinction. Nevertheless, genetic factors seem to influence the likelihood that an individual will engage in sex with a same-sex partner. However, human genetic studies have often lacked statistical power and/or are limited by the confounding effects of cultural practices and the environment at large. Here, we turn instead to a unique resource, the free-ranging colony of rhesus macaques on Cayo Santiago Island. We propose the first ever study quantifying the evolutionary mechanisms and functions of same sex mating behaviour in nature. Using extensive behavioural data and cutting-edge genomic analyses, our results should lead to re-thinking of the prevalence and causation of same sex mating behaviour in wild primates, with relevance to human societies.

Alternative mating strategies, such as extra-group paternities (EGP), may be driven by the divergence of reproductive interests between males and females. EGPs may counteract negative fitness consequences, contribute to genetic variance or change group stability. They have broadly been described in several species of non-human primates, wherein genetic data of a few birth cohorts of a given social group revealed that a proportion of offspring are typically sired by males not resident to the social group at the time of offspring conception. Whereas much has been discussed about the occurrence of surreptitious matings, minimal work has been done to analyze factors leading to EGPs in non-human primates. My study will comprise nine years of demographic, dominance and genetic data of all groups of the rhesus macaque population of Cayo Santiago. We will investigate EGPs from different perspectives including from the social group level, male and female individual perspective.

As in humans, the social environment&nbsp;has also been linked to mortality in some nonhuman primates, including close relatives of macaques. More socially integrated&nbsp;individuals are healthier and live longer than less integrated individuals, and this association is the strongest in the oldest individuals in a population.&nbsp; To identify the molecular underpinnings of this link, we draw&nbsp;behavioral and genomic data from Cayo Santiago rhesus macaques. We&nbsp;merge cutting-edge functional genomic analyses (RNA-seq, ATAC-seq, and novel single-cell approaches) with behavioral observation methods to study how behavioral variation might insulate individuals from the detrimental effects of social adversity on health

This research has implications for understanding how social adversity recapitulates, or even accelerates, the changes seen during normal aging. More broadly, identifying the molecular phenotypes on which natural selection acts will lead to a better understanding of both the evolution of affiliative social behaviors and the well-documented link&nbsp;between sociality and components of fitness.

The aim of this research is to determine why social relationships are formed and how they are maintained. Within groups, individuals differ in their tendencies to interact with others and in how deeply embedded they are in their social networks. This research investigates the heritable basis of individual differences in sociality, along with their physiological causes and impacts on health, life-history, and fitness. In addition, this research explores the evolutionary mechanisms that underpin social dynamics and asks how cooperation is maintained in animal societies.

Predicting ecological and evolutionary dynamics requires an understanding of the diversity of life courses among individuals, since life courses shape demography, which in turn drives evolution. Heterogeneity among individuals influences the speed of adaptive and neutral evolutionary processes, but it is less clear how biotic and abiotic environmental fluctuations influence variability among individuals. Such variability is reflected in individual life courses, defined as the sequence of stages experienced during an individual&rsquo;s life. Identifying the sources of variation in life courses remains a fundamental task to address in order to understand the meaning and significance of phenotypic variation within populations. A multi-stage model using a first-order Markov process describing reproductive dynamics, as well as estimates of population entropy are being used.

The aim of this study is to explore what rhesus macaques understand about the physical and social world. This project first examines whether rhesus monkeys reason about agents in the same way as humans do &ndash; by considering their intentions, beliefs, and desires. These questions are to significant importance in the field of developmental psychology and comparative cognition &ndash; the question of whether non-human primates can reason about objects and agents has been one of the longest-standing questions in the field of primate cognition. In addition, learning more about how monkeys reason about agents will provide a potential animal model of human disorders to agency understanding (e.g. autism).

The current investigation seeks to understand the neural mechanisms responsible for making decisions, approached with a panoply of behavioral, physiological and genetic techniques. His current research aims to examine genetic and endocrinological factors underlying individual variation in social behaviors and the processing of social information in rhesus macaques. This research is part of a larger effort to develop an animal model of complex social behavior which can be used as a model to understand human behavior, including pathologies such as autism.

This project will examine how rhesus macaques make decisions in order to understand the evolution of human-like economic behavior and self-control. Decision-making pervades human life, from assessing whether to save or invest money, to choosing whether to give into temptation and eat a slice of cake. These types of decisions often have parallels with wild behaviors, as foraging animals must assign value to different possible options, make trade-offs between costs and benefits, and deal with conspecifics who are trying to solve the same problems. As these complex skills often show significant changes across the lifespan in humans, we will therefore examine monkey decision-making across early development, adulthood, and aging in order to understand the ontogenetic trajectories of decision-making across species.

Communication is a defining feature of sociality, and faces potentially offer others a wealth of information about identity, emotion and intention. Despite this, we know little about what makes facial communication complex, and how to distinguish between species that have sophisticated facial communication, and those that do not. Addressing these issues will allow us to better understand the evolution of complex communication, including our own. The aim of this research project is to develop and test a new methodology to analyse communication via the face. We will combine the Facial Action Coding System (an anatomically-based system designed to break-down facial expressions into their most basic observable units, the contraction of individual facial muscles) with Social Network Analysis (a method to measure relationships between units in a system) to develop a novel framework to study communication via the face: NetFACS. In NetFACS, facial expressions will be conceptualised as a network of facial muscles, interacting to produce communication. This method will take into account the dynamic nature of facial expressions and therefore, better reflect its complexity. Once developed, we will use NetFACS to test the hypothesis that social complexity drives the evolution of facial communication complexity by comparing four closely related macaque species, including rhesus macaques at Cayo Santiago Field Station. To date, there is limited information on the impact of paternal relatedness upon the evolution of social behavior, and of its underlying mechanisms. Therefore the aim of this study is to investigate the mechanisms and cues rhesus macaques use to identify their paternal kin. To do so we combine long-term behavioral, demographic and genetic data to distinguish between the two most likely mechanisms: familiarity and phenotype matching. Furthermore, we investigate potential cues used such as visual, odor, and acoustics via different experimental approaches conducted in the field.

This research investigates the relationship of gastrointestinal parasites with social and reproductive behavior in a habituated population of rhesus macaques in Cayo Santiago Island, Caribbean Primate Research Center. Parasite species diversity, prevalence and density will be compared between seasonality (birth vs. mating and rainy vs. dry), demography, and status in the dominance&nbsp;hierarchy. This research will broaden the understanding of the relationship between parasites and wildlife hosts and can be translated into wildlife management and conservation practices&nbsp;in&nbsp;<em>Macaca</em>&nbsp;and other mammal species

This doctoral dissertation will investigate cooperative exchanges in order to test predictions from several competing evolutionary hypotheses about cooperation. Specifically, the project will examine how well reciprocal grooming exchanges resemble those predicted by several competing theoretical hypotheses (kin selection, reciprocal altruism, biological markets theory, and social bond investment), in one comprehensive and integrated analysis. Additionally, there will be a more detailed investigation of biological markets theory. By focusing on exchanges of grooming for mates or infant handling, this study will also test a key prediction that exchanges conform to supply and demand relationships. The extent to which apparent supply and demand relationships may be artifacts of, or mediated by, stress responses will be examined behaviorally and physiologically.

CPRC is supported by The Office of Research Infrastructure Programs (ORIP) of the National Institute of Health (NIH) through Grant Number 2 P40 OD012217, and the UPR.